It seems a reasonable assumption that as automotive technology becomes more sophisticated, it also becomes more intelligent, convenient and secure. However, as many car owners are unfortunately finding, not every new piece of technology fills every one of those requirements.

Recent statistics from the Home Office say that vehicle theft has rocketed by an unnerving 50% in the last five years, and keyless entry systems have been a factor in many of those cases. It’s not the sort of feature you’ll often find in the salvage cars amongst our own online car auctions here at RAW2K, but it’s a growing concern for buyers of brand new cars. So what exactly is the problem with keyless entry, and why is it making so many car buyers uneasy?

What is keyless entry and how can it be exploited?

The principle behind keyless technology is fairly simple - it allows you to open your car door without physically having your keys in your hand. The way it works is that when you put your hand close enough to your car, generally on the door handle, the vehicle will emit a radio signal. If your key fob is within range of that signal, the door will unlock itself.

Now, it’s all very clever so far, but the main security risk lies in the way that criminals can intercept these radio waves and unlock your car when neither you nor your keys are anywhere near it. The main way they do this is through the usage of electronic car relay boxes, which are widely commercially available. This means they don’t even need to enter your house to steal your car. All they need to do is place the device close enough to your home to pick up the signals from the key fob inside. The device will then boost these signals to a second device near the car, tricking it into thinking the keys are nearby, so it’ll unlock its doors. It’s referred to as car key hacking, or sometimes as relay theft.

While it sounds a scary (and all too feasible) prospect, there are fortunately some fairly easy ways for savvy car owners to prevent this, which we’ll go into in a bit more detail below. 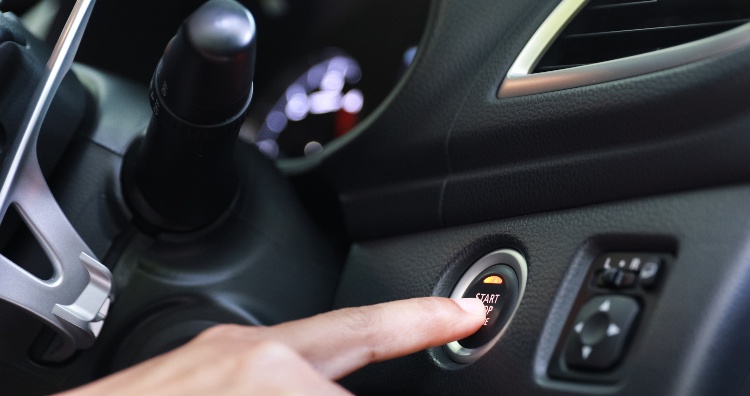 What do buyers think of keyless entry?

Understandably, the security vulnerabilities presented by keyless entry systems are already causing buyers a fair bit of trepidation, and it’s been the subject of a fair amount of industry furore too. Some of the most vocal critics include experts from What Car? and Thatcham Research, both of which routinely test new cars for security vulnerabilities. Thatcham Research is notably prolific in this area, and its experts rated many cars with keyless entry as ‘poor’ or ‘unacceptable’.

Buyers share these concerns, and many see the minimal convenience that keyless entry provides as unworthy of the tradeoff they pose in terms of security. Thankfully, it’s not going unnoticed by the industry at large. Several automotive giants like Mercedes have introduced auxiliary systems like motion sensor technology.

Essentially, this means that if you’re walking towards the car with your key in your pocket or handbag, the key will emit the signals that allows the car to open. However, if it’s left stationary for a set period of time, it’ll stop emitting these signals - so that even if criminals are in range of the keys, they’ll be unable to bounce any radio waves.

Plus, some keyless entry fobs allow owners to simply turn off the broadcasting feature, mitigating the issue entirely. What’s more, if you’re worried about relay theft of your own car, you’ll be glad to hear that there are a couple more additional measures you can take.

How to protect your car against relay theft

The defences against relay theft run the full gamut from high-tech countermeasures to cheap and simple fixes. Sometimes, it may even just take something as simple as a change of routine. Here are some of the best ones:

A Faraday pouch is a basically a container with the ability to block electromagnetic fields, including the radio waves that your keys and car use to communicate. It does this with a conductive fabric mesh lining, preventing any signals from escaping and denying any criminals outside the ability to intercept them. They can be picked up quite cheaply, often for as little as £10.

Use a steering wheel lock

With their sturdy appearance, steering wheel locks are not just great practical defences against car theft, but they’re great visual deterrents as well. By immobilising your car’s controls, a steering wheel lock means that even if criminals are able to get into your car, they’ll still be unable to drive it away, rendering most of their high-tech devices moot. A good quality steering wheel lock generally costs something in the region of £50.

This is one of the more expensive countermeasures you can invest in, but lots of drivers view it as well worth the cost given the peace of mind that it provides. On the off chance that criminals are able to get into the car and drive it away, a tracking device can make sure they’re not able to get too far. The cost can vary depending on the make and model of the car in question.

Criminals need to be within quite close range of your key fob in order to bounce the signal, so one very easy way to you can increase the security of your car is by leaving it well away from the door, even if it is in a Faraday pouch or similar container. Lots of people leave their keys directly by the door, which can make them easy targets for criminals.

What’s more, you can make sure to double lock your doors. (It’s not a specific defence against relay theft, but is good practice in general.) Lots of cars, including many of the salvage cars we supply here at RAW2K, have this feature, but it’s not always widely utilised by owners. Pressing down on your key fob once will lock your doors, but only from the outside - which means that someone can unlock it by smashing a window and reaching inside to unlock it. However, pressing down twice in quick succession on your key fob will ensure that your doors are locked from the inside as well.

This might not sound like much, but it costs would-be thieves precious seconds, and when you’re breaking the law, time is everything. Even a short delay can be enough to break the nerve of a would-be car thief, so you don’t wake up to an empty driveway.

As a relatively new technology, keyless entry systems are mostly only affecting the newest cars on the market, which means that used cars can sometimes be the better choice in terms of the security they provide. That’s where we come in here at RAW2K. We’ve got a huge range of seized, salvage and used vehicles to choose from, including models from leading brands like Renault, Vauxhall  and Ford. Our auctions are refreshed on a daily and weekly basis, so there are always great deals to be had. Why not take a look around our site, and see what you can find?